The First FO of the Year 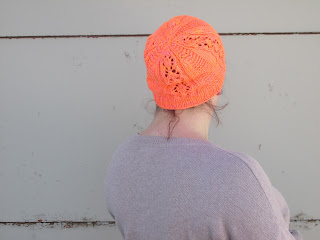 Right at the tail end of 2015 I got a hankering for a hat. I've been planning on knitting Talus, but I hadn't gotten around to winding the yarn for that yet (but I did wind it yesterday, so that hat is on deck!). I'd had this tosh DK wound for a couple months while I tried to decide what to do with it, and when the hat bug bit me I pulled it out to cast on a Maple Slouch. (Fun Fact: We actually had a ton of maple trees in my yard when I was growing up-our street was called Maple Lane, and we easily had a dozen trees or more just in our lot.)

I love this yarn so much-it is probably the most aggressively bright yarn I own, and I'm pretty sure this hat is going to be my "walking at night so cars can see me" hat. It's really bright, and the lace and garter stitch pattern really adds to the character and charm. (Apparently everyone else in my house hates this color, but they can all have fun on Being Wrong Island while I hang out here in my awesome new hat.)

It worked up pretty quick-I certainly could have knit it up in a Saturday if I'd worked on it monogamously, but I had other pressing things on the needles (namely, Drift). It was definitely nice to have something small to pick up and put down over the new year, and this was definitely a welcome break from my sweater projects. 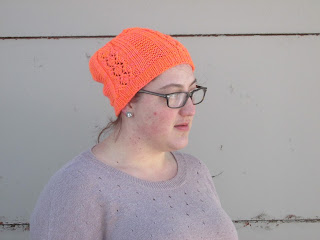 I hope you all had a great weekend! I'd hoped to get a lot of reading done, but I ended up just marathoning Murder, She Wrote and Mythbusters trying to get Drift finished. C'est la vie. I'm not hitting a January knitting slump like I did last year, which is great, but I keep getting distracted by all the fun projects I have planned!
Posted by Kat Riddell at 7:57 AM