Trying to Get Back to Normal 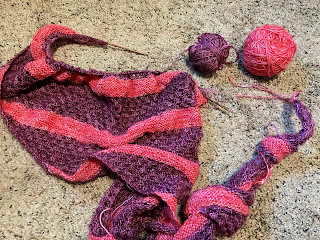 Okay. This week we're trying to get back to normal. Lee Lee's mouth is still bugging her a little bit, but I let her out of her cone for a few hours yesterday, and I'll let her out of her cone for a bit today. I'm hoping to be able to get a look in her mouth at some point to see if there are any stitches still hanging on, but most, if not all, of them should have dissolved by now. We're finally back to sleeping through the night (well, my sleep's been a bit rough, but that's all on me and not on Lee Lee being miserable), and I scheduled a massage for this Friday as both a reward for getting through the last month and a half and also to fix my poor back, which has taken the brunt of all this stress.

I haven't been knitting much, but I'm hoping to get back into it this week. I have a couple projects I've been working on for several months now, including this shawl which is almost at the halfway point. I also need to start knitting for xmas—I'm only knitting one gift, but given how my knitting productivity has taken such a hit the past few months, there's a change it'll still be tight.

I'm also in the last two weeks of the semester! I have three papers, a powerpoint presentation, a screencast and how-to guide, and a libguide due in the next two weeks, and I am feeling the crunch. I took most of last week off from school work, which made the weekend a bit rough as I scrambled to catch up, but it was definitely the right call, and I'm feeling pretty good about where I'm sitting now. It'll be busy, but I think I can do it. I hope. Once I get these assignments in, I'm on break from school until the end of January, which is sounding really nice right now.

Quickly on a Monday

Happy Monday, friends! I hope you all had a restful weekend. I don't have class this week, so I took all weekend off from school. Saturday I did NOTHING, which was exactly the kind of break I needed, and yesterday I finished a comic book I'd been reading and did some picking up around my apartment. My bedroom's been a disaster for weeks, which is understandable, and I had a huge pile of boxes next to my dining room table that I needed to throw out. I feel so much better now, even though I still need to tidy up a couple small areas, so it was a weekend well spent.

Lee Lee is pretty much the same. She really hates not being able to scratch at her mouth, but I'm just as stubborn as she is, and she's only managed a couple quick scratches before I've caught her. We're seeing the vet for her post-surgery check on Wednesday, and hopefully her mouth will be healed by then and we can take the stitches out. I'm hoping that the stitches are what's really bugging her right now, but she did have quite a few sore spots in her mouth after surgery, so we'll see how she's doing.

Lee Lee is doing...well, we're hanging in there. Her surgery went well on Tuesday—they cleared out some infection and closed the fistula—but she managed to tear her stitches out on Wednesday, so we had to do a quick vet run for that. Her mouth only needs one week to heal and our primary goal for this week is to keep her from touching her mouth. I've been alternating keeping her in a backpack with only her head free and letting her wander around in a cone, and so far it seems to be working. Fingers crossed.

I'm still a bit behind on school—nothing's late, but I haven't started a couple projects that are coming up, and I'm not quite where I'd hoped to be on some bigger projects that I've already started. It turns out it's really hard to focus on anything when you're trying to keep a very resourceful dog from ripping her stitches out. I don't have class at all next week, so hopefully I'll be able to get myself caught up.

I've also not really been doing much knitting. I do have a shawl sample finished, and I've started writing the pattern, but it's on the back burner for now. I'm also feeling pretty burnt out—I was handling working full time, school full time, and pandemic stress pretty well, but then we got slammed with election stress just as I was also getting slammed with this whole vet mess, and, understandably, I'm pretty fried. I'm focusing on taking care of Lee Lee and paying attention to my self-care plan, and then whatever I have left goes to making sure I'm not missing anything for school.

So that's where we are right now. I'm hoping that by the end of the weekend Lee Lee is healed up enough that she doesn't want to scratch at her face and we can try going for walks again, but we'll see how it goes. Take care of yourselves, kittens. 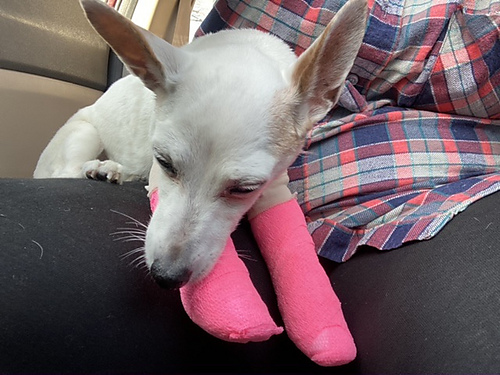 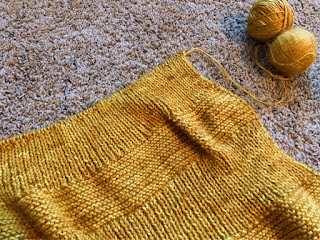 Happiest news first: I am just twenty rows from starting the border on this shawl. It's so soft, and it's been such a great knit. I'm hoping to get it finished by midmonth, but given everything in my life and in the world right now, no promises. You'll get the pattern as soon as I can get it finished.

Mixed news: the good news is that Lee Lee is healing enough that she has the energy to cause a lot of trouble. The bad news is, she's causing trouble, and she's still miserable. I got a cone for her on Friday, and she hates it. She vacillates between lying on her side like she can't move and furiously thrashing around trying to get the cone off—and I mean furiously. She's launched herself off the bed, essentially backflipped onto the hardwood floor (and the concrete outside), and if I try to hold her still then her little nails just dig in everywhere.

I'm back to having her on pain meds, because she's obviously not ready to be off them yet, and those keep her pretty stoned most of the time, which is a relief. The last few days have been especially rough—she's accidentally peed the bed a couple of times, and she also managed to absolutely cover herself in poop twice (once she got herself trapped under a chair and was stuck in it, the second time she was too busy trying to get the cone off to realize she was pooping and kept rolling around in it). I am exhausted. Hopefully we're almost done with all this. I promised her no more surgeries, because if she's this miserable for this long after dental surgery, I don't think she'd make it through a more invasive surgery.

At least focusing on Lee Lee takes up most of my energy so I don't have time to doom scroll and think too hard about the election. If you're able and you haven't done so already, please vote. Also make a plan to take care of yourself for the next couple days/weeks, because it looks like they're going to be stressful no matter what. My good friend Patricia rounded up some good tips in her newsletter.

Posted by Kat Riddell at 9:28 AM No comments: