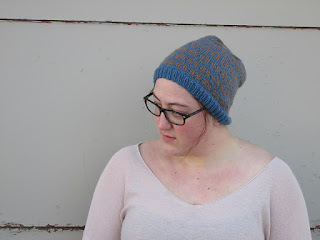 (I never blogged this hat, but I needed a picture for this post, so here it is. The pattern is Oakenshield Armored, Ravelry page is here.)

I've been thinking a lot over the past few weeks about what I want to accomplish in 2016. While I was working on my 2015 retrospective, there were a few things that stood out to me, and I'm working on how to approach that in the coming year.

In 2015, I was immensely disappointed to find out that I only knit three pairs of socks. I'm hoping on upping that this year-I have two pairs on the needles right now for Mum that I'd like to get done, and two skeins of sock yarn that I've identified for cinema socks, and then I'd also like to finish my Darjeeling socks of the Yeti Incident done, and as a bit of a stretch, maybe knit Bowties are Cool, Snape's Stockings, and Dumbledores's Christmas Stockings this year.

I also want to do a large lace project this year, but first (and I'm carrying this over from last year), I really would like to finish my Rose Medallion shawl. I have one knitting friend who took ten years to knit a lace shawl, and I don't want that to happen to me. I know it's a bit much to try and finish this year, but if I can get the medallions knit, I can do the corners, grafting, and border in 2017. Right now I have 6 out of 16 medallions knit, so that should be a reasonable goal. As far as the new project, perhaps either Dew Drops or Echo Flower-I've been planning both for a while, and have the yarn for both, so we'll see what I feel like-maybe I'll be really industrious and get both done!

Of course, I'm using up stash yarn for those things so I can afford sweater yarn! I have all of my Sweateritis sweaters going, plus I also recently scored some yarn on sale for an Emelie, which I've had queued forever. I also have five sweater designs planned for this year, and a new sweater for my mum, so between all that I'm going to be buried in cozy sweaters for a while.

And then there's the stash. I have a few yarns that I'd like to knit up-ones that I've identified for my sock and sweater goals, especially. I'd love to knit up my Irish yarn from my friends' trip to Ireland last year-I think it's going to be a Guernsey Wrap, and I'm really excited for this. Then there's three skeins of alpaca that a college friend brought be from Russia that I think would be perfect in a 3 Color Cashmere Cowl. I'd also like to knit up some of my Jitterbug stash-I love those yarns so much, but I rarely knit them up. I took it upon myself to trawl the Ravelry database to find the perfect patterns to use up a couple skeins each, and I found Byatt and Sun Kissed. I'm really excited for both of these, and I've already picked out colors!

I'm also hoping to get some more skirts and  warm-weather tops knit this year-I have several queued, but I'm not going to set any firm goals for those yet.

I feel good with this list-I've definitely identified the things that I plan to knit, and I've taken steps to make up for areas I didn't knit in as much last year. Some of these goals are a bit ambitious (TEN SWEATERS??), but there's still room for flexibility-one thing I learned from making some knitting goals last year was that I made it about one project in before I cast on something impulsive, so I know I like having flexibility in my plans.

Hope you're all having fun planning your 2016 knits, and may this year hold lots of woolly goodness for all of us!
Posted by Kat Riddell at 7:53 AM