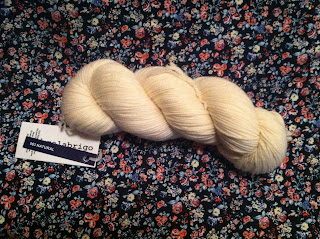 What you see right there is a polar bear.

Yes, I understand that it doesn't look especially much like a polar bear, but bear with me.

I've been charmed by Holly Priestley's Polar Bear Pullover since it came out, and finally the charm just got too overwhelming and I came down with a really bad case of OMG GOTTA CAST ON RIGHT NOW.

So I did what any reasonable person would do and I moseyed over to the WEBS site to fill a bag up with some Arroyo, and there's a delay on the color for the sweater portion of this sweater. I'll get it soon, and their customer service is the absolute best, and then I'll get to cast on and everything will be beautiful and woolly.


On an aside, I've already christened this sweater "le bear polar," in deference to the comedic genius that is the BBC Radio 4 series "Cabin Pressure," and the episode where Benedict Cumberbatch talks about a polar bear in a terrible French accent.

Since it's Wednesday, I suppose I'll mention some of my WIPS. Que Sera has most of the body done-I'm scant rows away from finishing the left front, then it's just the right front and back. I'm not feeling super into sleeves right now, and it won't be warm enough to wear for several more months, so I might just churn out the body and set it aside to finish in April or something. Whatever.

The aggressively yellow Winter Helmut is still sitting in stasis waiting for me to get past the sleeve division, and I really need to sit down and fight with work on that more so I can actually wear it before it gets too warm.

My Audrey in Unst is started, but I've decided to change the waist shaping and lengthen the body, so I need to think a little about that. Plus 242 stitches in fingering-weight 1x1 twisted rib turns out to be a real PITA and it's taking forever, so again, whatevs. There's another dozen-ish (or more) projects floating around, but they're not sweaters so I really don't care about them right now. (Don't tell them I said that, I'm sure I'll come back around soon.)

Off in not-knitting land, one of my office mates has been out and I've been taking care of her plants, and I think I've killed one (in my defense, I think it was sick, and she knew my history with killing plants before she left).
Posted by Kat Riddell at 7:59 AM