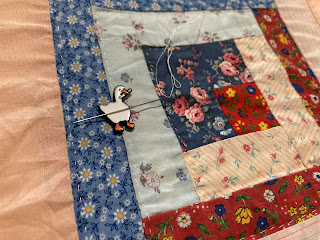 I released two patterns that I worked on throughout last year, and I currently don't have any designs in progress. I'm not sure how I feel about that—on the one hand, it's nice to have that pressure taken off me, but on the other hand, I've been working on some design or other straight through since 2014, so it's definitely a change.

Classes have started, and I think it's going to be a good semester. It doesn't look like any of my classes will be too too difficult or onerous, which is a relief—I don't have major projects in two of my three classes, and so far my reading load is about half of what it's been in past semesters. I have to do my graduation portfolio this semester, too, which I'm not really looking forward to, but I've come this far, so I'm sure I'll get through it just fine.

One thing I finally did this month, after putting it off for years was sandwich my vintage quilt top. I got this at a church bazaar back in 2014 (I think?) and I've been seriously meaning to sandwich it since I moved into my apartment. For whatever reason, it just never was a priority when I had the time to do it, but a couple weeks ago I decided to go for it. I haven't been knitting as much during my classes as I thought I would before I started library school, and it's really good for my mental health for me to make things with my hands.

This quilt top isn't perfect—there are crooked bits, and the fabrics are all different weights, so some have stretched out more than others—and that gives me a lot of freedom to not worry about quilting it perfectly. I can just enjoy the process of stitching and not think at all about how even or straight my stitches are. I've really been enjoying being able to just make something without putting any pressure on myself to make it perfect, or even good. No matter how messily it's stitched, as I'm sitting in class or watching YouTube, it will be functional, and I'm sure Lee Lee will fight me for possession of it when it's done.

There's probably something there about the freedom of doing things badly—even intentionally doing things badly. Sure, there's a lot of satisfaction surrounding a perfectly executed project, but right now I'm really loving the process of stitching without any pressure to make it look nice. 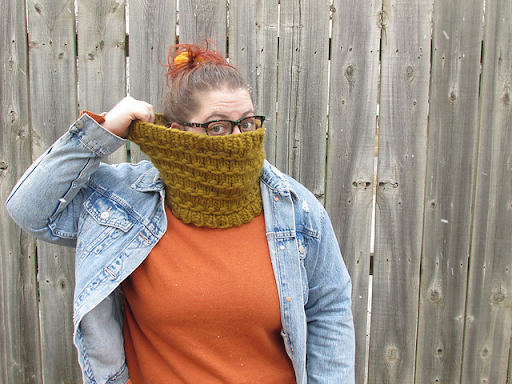 Jasper Beach is a quick knit with a big payoff. Super bulky yarn coupled with bobble stripes creates a thick, cozy cowl sure to keep all kinds of winds and chills off your neck. Perfect for cold-weather foraging, beachcombing, and just walking around your neighborhood. 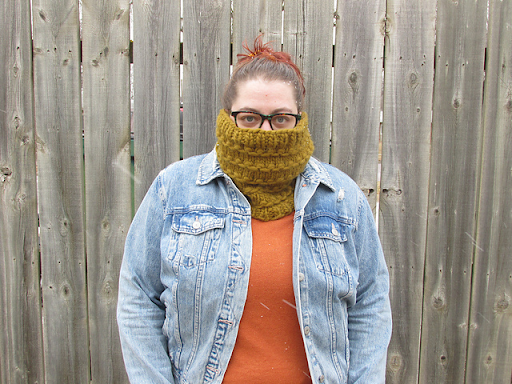 Jasper Beach is worked in the round from the bottom up. 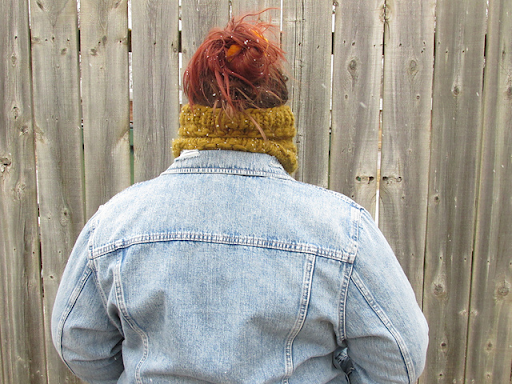 Jasper Beach is available on Ravelry and Payhip, and you can use code PEBBLES for 20% off through Wednesday, January 26!

This is the last pattern I have lined up for release for a while—since it's my last semester of library school, I'm taking even more of a break, and I currently don't have any designs in progress! It feels weird, but I'm letting myself focus on finishing my degree, working out my next steps, and taking care of myself. Maybe something new will sneak into my sketchbook or onto my needles, but I've taken that pressure off myself for the next six-ish months.

Posted by Kat Riddell at 8:15 AM No comments: 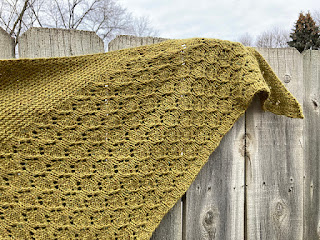 Scrounger is a cozy, textured shawl worked sideways from one point to the opposite side. Featuring garter stitch and a simple lace repeat, Scrounger is both comforting to knit and easy to wear. 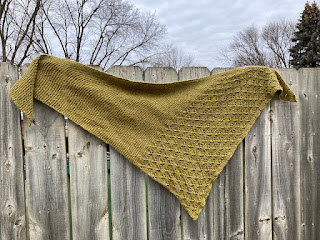 Perfect for wandering around in the woods or downtown, Scrounger is the ideal shawl for uncovering hidden treasures. 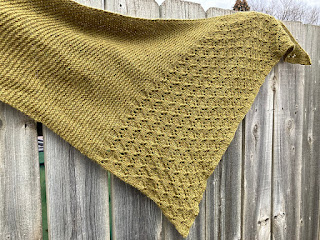 Scrounger is currently available on Ravelry and Payhip, and it's 20% off through Friday, January 21 with code FIND.

Posted by Kat Riddell at 8:08 AM No comments:

I made it through my third semester of library school, all the winter holidays, and a quick ER vet trip (Lee Lee busted her eyelid on the coffee table, she's fine) and I'm looking kind of trepidatiously at the next six months.

In two weeks I'll start my final semester of library school, and sixteen weeks after that I'll be done. I'll have my master's degree. That's...huge. I don't know what job I'll have this summer, or where I'll be living, and it's a very intimidating feeling.

I've never really liked change, but I'm at this transitional period in my life where I need to go through some major changes to get where I want to be. My therapist says that this is a "growing time," and that it will be healthy for me. I'm trying to believe her. (I'm sure she's right, that's why she gets the big bucks, but it doesn't mean I have to be happy about it.)

I've toyed with choosing a word the past couple years, but this year it came really easy to me: Growth. A bit on the nose, perhaps, but I've spent a lot of energy over the past two years working on my education and my mental and physical health, and I've done a lot of that "invisible" growth—strengthening my roots and building up momentum—and soon I'll be ready to shoot out some new leaves and flowers. It's weird to know that I'm coming up on the end of a project that's taken most of my energy for almost two years

As afraid as I am of the changes facing me this next year, I'm also hugely excited to see where I end up and what this next stage of my life will look like.

I can say that I feel more at home in myself now than I ever have before, and that makes me hopeful

In an effort to not put too much extra pressure on myself, I think I'm going to commit myself to checking in here monthly for now. I'm also not committing to designing right now, but have two patterns with my tech editor right now, and I'll pop in to announce those here when they go live. I have some sketches in my notebook, and I've mentally assigned yarn to them, but we'll see when they get started. At the beginning of library school, I had high hopes for how much sample knitting I'd do in class, but it turns out that grad school is mentally exhausting, and I'm finally accepting that and taking all the pressure off. 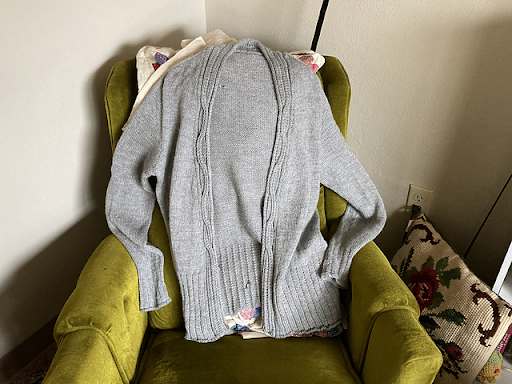 I suppose you'd like a picture of something knitterly. This is my mother's xmas sweater, which I started mid-October and finished three days before xmas. She had bought the yarn a couple years ago, and approached me in October about knitting her a sweater with it for her gift. It's the Natural Cardigan (Ravelry Link) by Christina Körber-Reith, and it really was a pleasant knit.
Posted by Kat Riddell at 3:08 PM No comments: