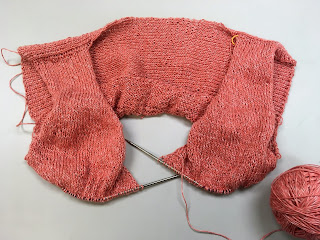 Back on Friday, when I started planning my weekend, I thought I'd spend two long days getting a bunch of knitting done. I have a pattern to finish writing up, a couple of samples on the needles, a sweater that only needs half a sleeve left to go, and I really thought I had a good chance of getting a bunch of stuff caught up on.

Well, Saturday morning I had to admit to myself that I'd let my apartment get into A State, and it really needed some love. So I spent all day Saturday cleaning and WOW my apartment is so much better now. I even finally repotted my orchids after having that on my to-do list for months!

So I didn't get any knitting done on Saturday, but yesterday I sat down in front of Netflix with my vest sample and banged out a few inches. As you can see, the fronts and backs are joined and it's finally starting to look like an actual garment. This is my favorite stage of a project, right when everything comes together. Obviously, there's still a ton of knitting left to go, but cruising along through the body of a garment is one of my favorite things to do.
Posted by Kat Riddell at 9:20 AM No comments: 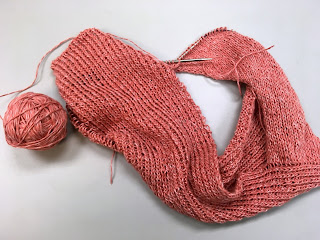 That long weekend was just the thing I needed—I spent most of a day in bed and finally kicked the end of a cold that I've been fighting for a couple weeks. I got a pile of costume alterations done for the dance studio as well, and I've only got three more to do now, which shouldn't take too long. I also finished the upper back of this vest sample and am on the second upper front now. It's at that stage where it looks a bit strange and twisted, but it'll even out and start looking like an actual garment pretty soon.

It feels good to be back to my regular routine after a couple of different weeks. I'm definitely a creature of habit! Last night I spent several hours in the kitchen, which I haven't been able to do for a hot minute, and I made brownies and a coffee cake and a sweet potato and chickpea skillet that I'll probably have for dinner tonight. It was great to know that I had time to cook without worrying about having to get somewhere, and it's so nice to finally have cake in the house again, I really missed it!

Posted by Kat Riddell at 9:14 AM No comments: 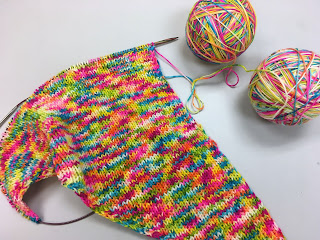 It's been kind of a slow week here. I took a few days off from knitting because I've been having a tendinitis flareup, and I'm definitely missing it. I gave in and knit a little bit last night and felt okay, and I'm really looking forward to getting back into my usual groove.

(Unlike other problems with my hands, my tendinitis doesn't necessarily make it so I can't knit, and knitting doesn't tend to bother my thumbs at all, but the only real treatment for it is total rest.)

A couple weeks ago I pulled out these two skeins from The Dyeing Arts that I've been holding on to for a couple of years now and cast on a new shawl. I've been thinking about what to do with these skeins for a while, and now that I'm finally working with them I'm really enjoying seeing how all these colors work up. 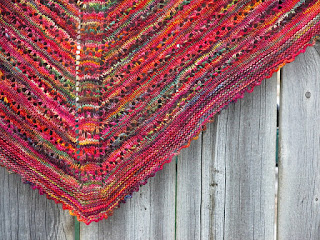 Astrateia is a generously-sized lightweight shawl with a simple lace pattern. Featuring a garter border and a picot bind off, this shawl is perfect for draping over your shoulders or wearing around your neck. Designed to work with both solid and variegated yarns, Astrateia is both a portable project and a wardrobe staple. 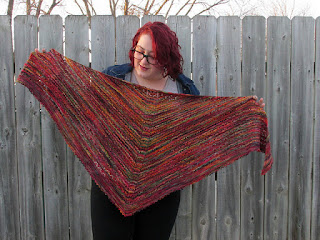 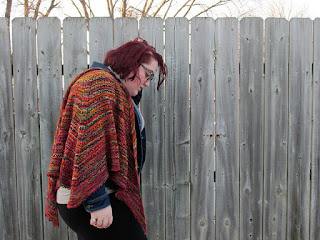 Updates on the Crud Front 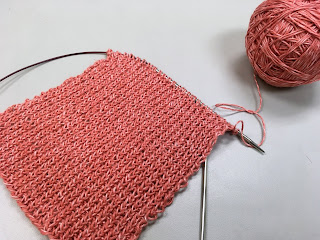 Gosh, it feels like it's been FOREVER since I've spoken to you all, and I'VE MISSED YOU, KITTENS. It's been kind of crazy since my last post, so let's catch up:

-Saturday my mum and my sister and I went to Omaha for the day. It was tons of fun—we ate at our favorite sandwich/salad place, we went to a huge used book sale, and we stocked up at Trader Joe's—and even the long drives were enjoyable. Between the drive there and the drive back (about two hours each way) we saw twenty-three hawks (!!) and three bald eagles (!!!).

-Sunday I was exhausted and starting to feel a little crummy. I spent pretty much the whole day at home, did the bare minimum of housekeeping, and spent lots of time in bed with Lee Lee.

-Monday I felt like a colony of fire ants had moved into my throat. The doctor said it wasn't strep, probably a cold, and I tried resting and drinking fluids. Monday night I also had to go back into the dance studio to fit some costumes.

-Tuesday the cough and sinus congestion kicked in, and they've been holding pretty steady ever since. I don't know what this crud is, but there's a lot of crud going around this town (small town with four schools AND a major university = a petri dish of weird viruses that we all just keep passing around forever and ever).

So that's pretty much been me. I skipped choir and dance this week in favor of trying to get more rest, but I still don't feel like I'm on the upswing yet. In one tiny flash of good news, I did finally manage to get all the math and construction notes done for a new pattern for summer and have cast on the sample, which I'm so far finding ridiculously charming.
Posted by Kat Riddell at 8:42 AM 1 comment: