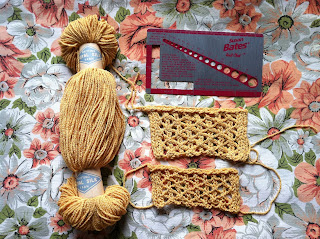 While I was cleaning this week I stumbled across my Fall 2015 Knitscene and a couple of skeins of the Japanese Silk I got in the Great Northern Knits Kickstarter that I'd wound up for swatches a couple of months ago, and I sat down right there on the floor and knit the swatches for my Cormac Sweater.

This yarn has no information on the band at all except that it says it's all silk, but by eyeing it I thought it would have to be held double, so that's how I knit my first swatch, and...it turned out too big. I'm honestly surprised, but this yarn has a unique structure that I want to try and talk more about another time, so I re-swatched with the yarn held single, and it was spot on.

I'm so excited for this sweater, and it's going to be really difficult for me to wait until Drift is done and not cast on OMG RIGHT NOW. 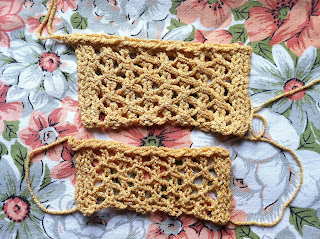 In the non-knitting part of my world, Mystic broke his dew claw somehow, so I'll be bringing him to the vet later to get that sorted out. We'd hoped that our groomer could take care of it, and I brought him in yesterday for her to look at, but it's broken so far down she had concerns about causing pain or risking infection.

Monday was also my seventh Diabetes Anniversary, so of course I had to make cake. This year I went with a single-layer white box cake, and I made strawberry cream cheese frosting from this recipe. We usually make this cake (with two layers, and more strawberries sandwiched in the middle) for Midsummer, but I'd been craving it for the past week, and it's really hitting the spot.
Posted by Kat Riddell at 8:02 AM