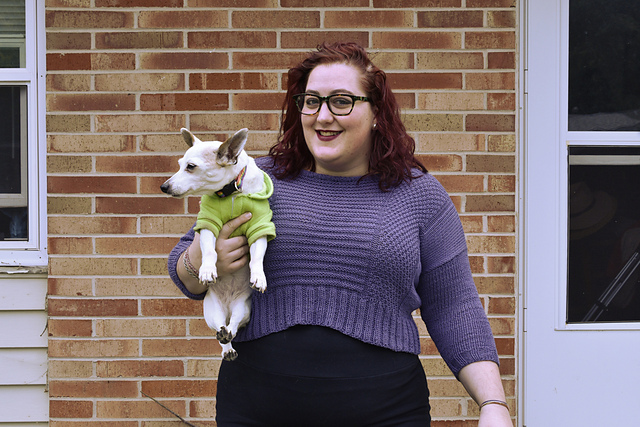 I love layering pieces, and Rhys is my idea of a perfect layering pullover. It’s loose, boxy silhouette is perfect with high waisted trousers or over dresses and skirts, and it also pairs well with leggings for a weekend afternoon on the couch. 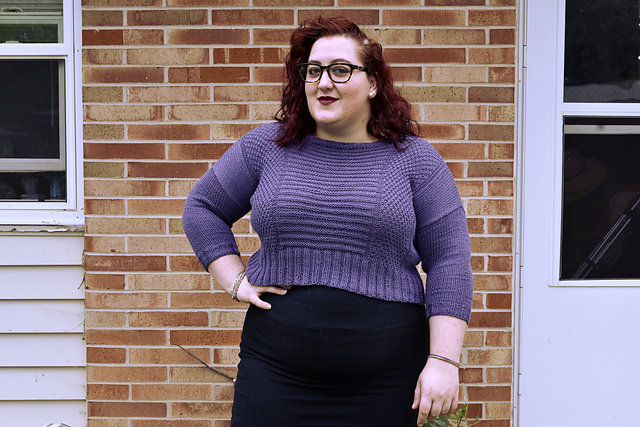 Rhys features wide textured panels on the front and back and is knit flat. The front and back shoulders are seamed together before picking up for the sleeves, and the sweater is then finished with two long seams going up the sides and down the sleeves. 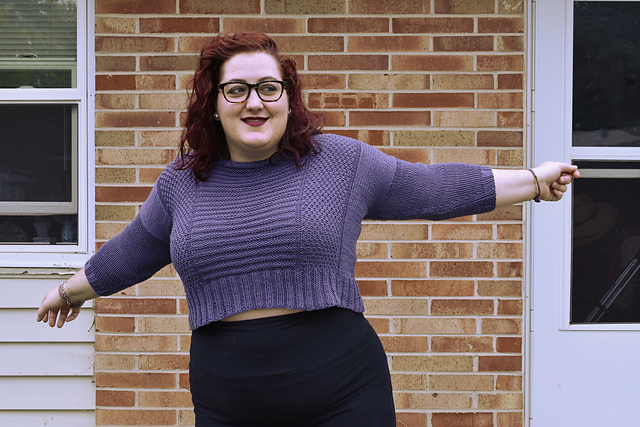 Rhys is now available in my Ravelry and Payhip stores, and is 20% off with code FALL through Friday, October 2nd. 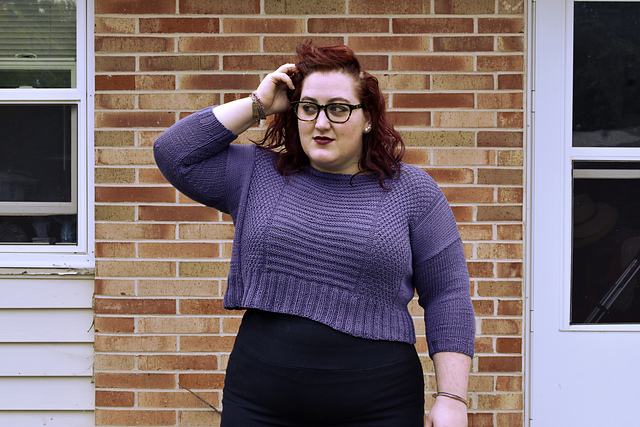 In Which I Make Good Choices 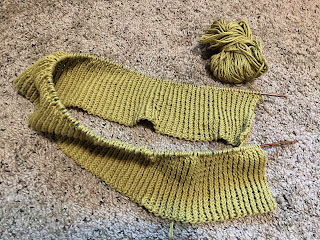 So. I have a lot of projects on the needles. It's always been a thing, since I started knitting: I cannot be a monogamous knitter. It's fine, I work on things as I want to, I usually have something I feel like knitting on the needles, and eventually everything either gets finished or sits around so long that my taste changes and I frog it. It's fine.

So instead of doing any of that I pulled out a sweater I started in 2018 and then put in the closet after a week. I'd lost the printout of the pattern, the two inches of twisted ribbing that I had so far wasn't even on the correct needles anymore, and I hadn't noted what size I was knitting anywhere, because I hadn't anticipated losing the pattern (listen, sometimes I am very foolish about what I am and am not capable of keeping track of).

And instead of working on anything that didn't require tracking down a needle and re-downloading a pattern and counting stitches to figure out what size I was knitting, I decided that the best use of my time was to do exactly those things, and now I'm four inches into a sweater that is neither a sample nor a quick project and I have so many WIPs piled around my home workstation and MY GODS won't any of these things knit themselves? 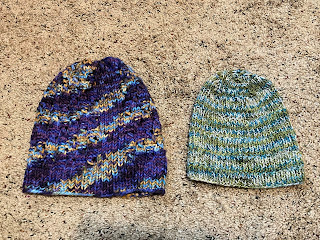 I hope you all had a good weekend! Saturday I had a belated birthday lunch with my mum and siblings, and it was great to hang out for a couple hours. I also got my first paper for grad school finished and turned in, and now I just have to wait and see how I did. I did manage to get my apartment picked up some, too, which feels great.

I finally blocked the first two hats from my current hat kick (I'm still working on my blue Pilstam, but I think that might be it for this current streak). The one on the left is a Cloudburst Hat (Rav link) by my friend Cory—I used a heavier yarn than called for, so I knit the smallest size and hoped for the best, and I'm pretty pleased with how it came out.

The other hat is Beanie Lines (Rav link again), and I really let the yarn do all the work. I'm so pleased with it, and I have just enough yarn left over to squeeze out a quick pair of fingerless mitts. Now, I've been planning to knit myself some new fingerless mitts for...at least two years, probably, and I haven't done it yet. But the yarn is sitting on my desk so I don't forget about it (as opposed to the yarn for another pair of mitts that's been sitting on my bookshelf for over a year so I wouldn't forget about it...).

Numbers on a Friday

1. Wednesday was my birthday!! I am now THIRTY, which is very exciting. (My BIRTHDAY SALE is still going on! You can use code HB30 on Ravelry and Payhip through September 15th to get 30% off all my patterns.)

2. I finished my sweater sample! I blocked it yesterday and it's still drying in my studio. I have the pattern maybe half written? I'm hoping to get it sent to my tech editor as soon as possible.

3. School is going well! I have my first paper due Sunday and a whole bunch of readings and summaries and analysis to do, but I really am enjoying it a lot.

4. It was cold this week! I always want it to be cold for my birthday but it almost never happens, so this was the greatest gift the universe could give me. It's sounding like we'll get back up into the 80s next week, though.

5. My apartment is lowkey a disaster because I haven't put away laundry in forever and I keep stacking empty boxes NEXT TO the trash instead of taking them out and really I ought to find like twenty minutes to deal with that because it's becoming A Problem.

6. Lee Lee had to start wearing her hoodies again this week, and also we got to make a nest on the bed with the fuzzy blanket, which she really loved. 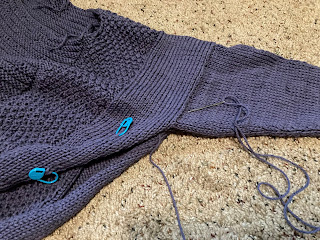 Hello friends! My birthday is Wednesday, and in true Kat fashion I will be celebrating all week (in fact, I started celebrating a week ago, and I'll probably keep celebrating through next week). What can I say? I love my birthday. Even the weather is turning out to help me celebrate—we may get some rain showers today and tomorrow, and it's not supposed to get above the low to mid 70s all week!

I had a very good weekend—on Saturday I had to go into the library to do some book processing, and then Saturday afternoon my mum and I got pedicures and watched Miss Marple. Yesterday I took the whole day off: I slept in, I read in bed all day, I took a little nap, and I ate lots of junk food. I've got a bit of reading for school to do tonight for class this week, but it's well worth it to have an entire day with no obligations.

The sweater sample is almost finished! I got the second sleeve finished on Saturday and started seaming it up. I do still have to knit the collar, but I'm very pleased with how it's coming out. I have yarn for a few more sweater samples lined up, and I'm torn between casting one on (well, swatching and grading and THEN casting on) or finishing up some WIPS. Right now I'm leaning towards the WIPs, just because a few have been hanging out for a while, but we'll see what happens!

**Remember that my BIRTHDAY SALE is still going on! You can use code HB30 on Ravelry and Payhip through September 15th to get 30% off all my patterns!**

Posted by Kat Riddell at 7:56 AM No comments: 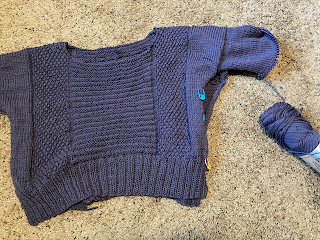 Grad school is not quite kicking my butt, but I'm definitely more tired than I used to be, and I'm keeping way closer track of my bedtime! I'm still working full time, and I'm in class 8 hours a week, and so far it's looking like I'm spending about 10 hours a week on readings and assignments. It definitely could be worse, but there's a specific type of thinking you do in academia and it's strange settling back into it. I'm adjusting, though.

I'm getting tons of knitting done during class, even if I haven't quite figured out when to get pattern writing done yet. This current sweater sample needs only half a sleeve and a neckband (and two seams, easy peasy). I'd love to get it written this weekend, but I know that's not going to happen—tomorrow morning I have to go into the library to do some book processing I can't do from home, and then in the afternoon I'm going to hang out with my mum and watch murder mysteries!

There were definitely some times as I was applying and registering for school that I thought it would have been easier if I'd just done it immediately after my undergrad, but part of being older and wiser means that I know to be gentle with myself as I adjust to the routine change and to not expect myself to have the same sort of "productivity" in my leisure time. And I know how important sleep is now, too (see previous comment about keeping track of my bedtime)!

I hope you're all doing well and being gentle with yourselves too, and that you have something fun planned for the weekend!

**It is almost my BIRTHDAY, which means it is time for my BIRTHDAY SALE! You can use code HB30 on Ravelry and Payhip through September 15th to get 30% off all my patterns!**

Posted by Kat Riddell at 8:50 AM No comments: