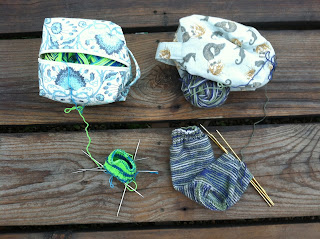 Normally, I don't plan too much for my weekends. Some Netflix, lots of knitting, chores. I'm a pretty low-key gal. But I've actually got some fun plans brewing for this weekend, and I think we'll probably come up with more before I get done with work today. Anemone's coming to visit this weekend, and initially we were planning on just hanging out and marathoning Harry Potter.

Then I remembered there's karaoke on Friday nights. So, okay, we'll do karaoke. Then, since the Shakespeare Festival is next weekend, the town's doing a bit of a gear-up week, and the classic cinema downtown is doing a free showing of Joss Whedon's Much Ado About Nothing on Saturday morning. So, we have to  go to that. The rest of the weekend is so far dedicated to watching the extended Lord of the Rings trilogy, but there's still room in  there for other fun things to pop up.

Since I've been feeling the urge to knit socks this week, I'm going with it. I'll bring a sock to the bar to work on during karaoke. Socks are also dedicated cinema knitting, and since we'll be at the cinema on Saturday morning, I'll have to bring a plain sock. My TPCT is probably only about half done now, and I'm sure I can crank out most of the rest of the body at least while watching LOTR, but I'll change it up by swapping between that and one of my patterned sock projects.