Careful Not to Twist 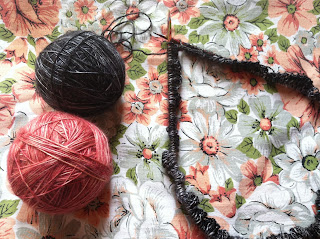 Friday night I finished winding the yarn for my Nusa KAL cowl, and I immediately cast on and found myself so smitten I just had to knit a few rounds. Saturday morning, I was similarly engrossed, and I knit several rounds during my morning coffee. Then, just as I was about to set it down to go for a walk, I noticed it,

You know that part in the pattern, where it says, "Join to work in the round, careful not to twist?" Heck, I've put that line in more than half of my own patterns, and I'm absolutely meticulous about checking my cast-on before I start knitting. But there, more than ten rounds into a project with a 336st cast-on, I saw it.

It was still there when I finally went home.

I'm almost back to where I was before I (gently) ripped back. Really, it's not much progress length-wise, but it was over 10,000 stitches when I had to rip it out. That stings a little bit. But hey, in terms of Tragic Knitting Mistakes, this is really pretty minor, and if that's my biggest problem right now, I think I'll be okay.
Posted by Kat Riddell at 7:55 AM