This Week in Numbers

This week feels like it's going to be really long. I mean, I'm getting a ton of stuff done, and I'm more productive than I've been in weeks, but I had a really bad case of "It feels like Friday" at about 2pm on Monday, so that's a big red flag right there. I'm immensely grateful that I have a three-day weekend this week, because I feel like I may need it. 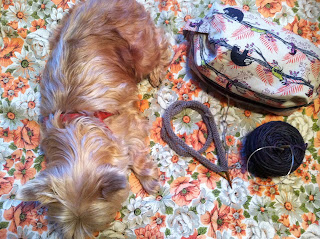 Anyway. Numbers, because that's how this week is going so far:

1. My From Another Place Crop Top is Done (note the capital D). It's blocking now, and I am so excited to wear it and hopefully I'll have pictures for you soon.

2. I cast on for my Cherry Pie Skirt on Monday night, but I'm just a couple rounds into the waistband. I know this one is going to take longer than the crop top (mostly because it's bigger), and like I mentioned Monday, I have a couple other small things to catch up on, like...

3. The short sample for Old Davis is also done and blocking. I have the pattern is on schedule for release next Wednesday, so definitely keep an eye out for that.

4. I cast on for Anemone's Portsmouth last night-I want to hurry up and get this done so it can be blocked and ready before Saturday night. I'm driving into the city to meet her for dinner and a roller derby bout, and it would be awesome if I could give this to her then. Besides, if I write here that it will get done, she'll read this and won't stop texting me until it is done, and that can't hurt.

5. Not knitting-related, but I'm getting a new stationary bike (Amazon says it will be delivered tomorrow, but sometimes that's a lie since I'm in a small town in the middle of nowhere) and I'm super excited.