Most of a Crop Top, and Half a Cowl 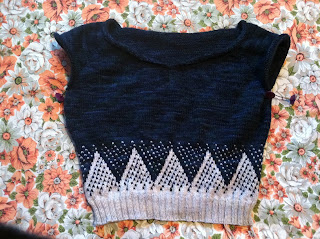 Well, I probably could have finished my From Another Place Crop Top over the weekend, but instead I got into a bit of a cleaning tizzy and only snuck a couple of hours of knitting in. I got the colorwork done and the ribbing started on Friday night, and I finished up the rest of the body at knit group on Saturday. I grabbed this picture while it was still light yesterday, but I also managed to get the collar knit during the first half of the Superbowl, so now it just needs sleeves! 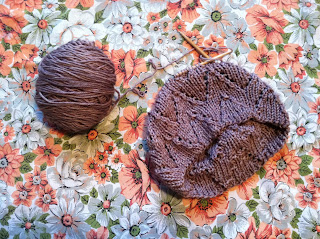 I also cheated on my top a little-I've been uncharacteristically monogamous with it since cast-on, so I don't feel too bad. But I've got Old Davis slated for release next week, and I need to finish the short sample and get a photoshoot done, so I brought it along to lunch on Saturday and choir on Sunday and I'm almost halfway through. The short sample is in Malabrigo Rios in Sand Bank, and this is probably one of my new favorite neutrals. I love the bright golden orange of the long sample like life itself, but this one has a lot going for it so far also.
Posted by Kat Riddell at 7:49 AM