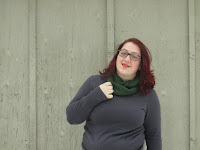 These have both been done for a while, so it's probably about time that I talk about them here! Anemone had requested a Portsmouth hat of her own back in September (eep!) and Mum mentioned that she'd like a Kermit (skinny version) of her own a couple of months ago as well, so I made an effort to finally crank these out.

I laughed a bit when I brought Anemone yarn shopping and she picked the same colorway as my Portsmouth sample. I think this skein is a little bit brighter than mine, but otherwise the two hats are identical. I banged this out in two days, and had it ready to give to her when I was in the city last weekend.

The skinny Kermit for Mum was also a really quick knit-not quite two days, but in less than a week of carrying it around it was ready for blocking, and she's already worn it several times. I love this green so much, and it's a spectacular color on her as well. 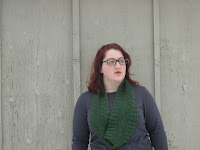