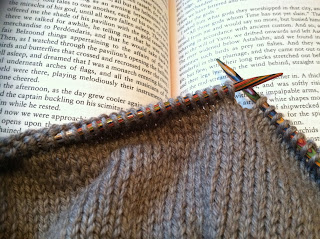 Well, the KALs I'm participating in are all trucking along just fine, and I'm...well, I'm not necessarily in bad shape, I'd just rather be in better shape. My Cherry Pie Skirt is at the point where I can knit a couple thousand stitches and not really see too much of a change, and I've been working on the main skirt for over a week and it still won't cover my bum yet, so that's disheartening. But I keep using up yarn, so that means that there's got to be some progress, right?

I did finally start working on this while reading-I'm behind on several library books, and I'd love to not have to return them without reading them, and I was so surprised to notice that I knit this faster when reading than when watching tv. I think it's probably because I read fast, and that naturally picks up my tempo, where with tv I generally match my knitting pace to the pace of the show. So that was a fun discovery, and hopefully I'll start feeling more momentum soon. Plus, I can't forget that I already finished a top for this KAL, so really it's unfair to think I should be further ahead than I am now.

My SpringTastic Socks are...plodding along. That's unfair, because I'm not working on them as much as other things. Last weekend I turned the heel on sock #1, and started the gusset decreases. hopefully it will pick up more now that only half of the sock is patterned, but it was hard to realize that the heel isn't actually the halfway point in an ankle sock. Womp-womp. This KAL goes until April 29, so I'm not really feeling rushed yet, which is nice.

Then...I tripped and fell in the indie.knits group and committed to the Nusa KAL. I've been wanting to do one of Cory's KALs, and this one just fit in perfectly-plus, it's almost eleven weeks long, so I'll definitely be able to finish on time. My yarn arrived on Wednesday, and I've been working on winding it, and hopefully I'll be able to cast on tonight, just a few days late.

**You may be wondering about the picture of me with a bike and a link to the American Diabetes Association 2016 Tour de Cure that's shown up in my right sidebar. I know I've mentioned it here before just a couple of times, but I've been living with diabetes since I was 18, and it can really suck sometimes. I rode the Tour in 2013, and I'm so excited to be able to ride again this year, and if any of you are able and willing to support me, I would be so grateful. So, it's there if you want to learn more, but I certainly don't want anyone to feel pressured at all.**
Posted by Kat Riddell at 7:54 AM