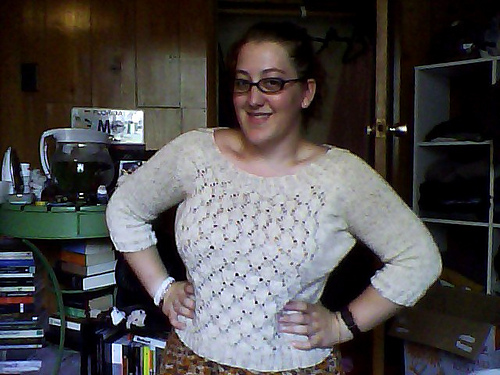 Apologies in for the bad "before" pictures, but I took these three years ago with a webcam and didn't take new ones before I put this back on the needles. When I was a younger knitter, I had a problem with sweaters. I didn't really think things through well, I had poor construction, and I routinely did a terrible job matching yarn to a pattern. My No Boyfriend Sweater was the third sweater I ever knit. (Number one was Kaleidoscope, which fell victim to terrible yarn choice and drowned in the frog pond, and number two was Division, which, though wearable, suffers from poorly-seamed sleeves.)

I chose to knit Not Your Boyfriend's Sweater out of some Evil Corporation Cotton Print that had been in my stash since I first decided to learn how to knit, and I finished it shortly after I finished college. I think I might have decided to cut some length because I thought it would look fine and I wanted it to be done. I wore the sweater just twice, and it has been sitting on my closet shelf ever since. It really hits at an unflattering point, and it just was an awkward length to wear with anything. It has no shaping, so even though it ends at the narrowest part of my waist, it looks much wider.

I had the idea to rip back and lengthen it several months ago, but kept putting it off in favor of new projects. I still had plenty of the yarn sitting in my stash, waiting to become washcloths or something, and shortly after finishing my accidental sweater, I decided to just bite the bullet and fix this one quick. This cotton is soft like a sweatshirt, and I know this can be a great sweater to wear with leggings and curl up on the sofa to watch the snow and drink coffee and cuddle the dogs and watch Forensic Files.

I've already zipped through a few more lace repeats while waiting for the rest of my Giftmas yarn to come in the mail, and hopefully I'll be able to finish up before it arrives and I have to dive back into Top Sekrit knitting! 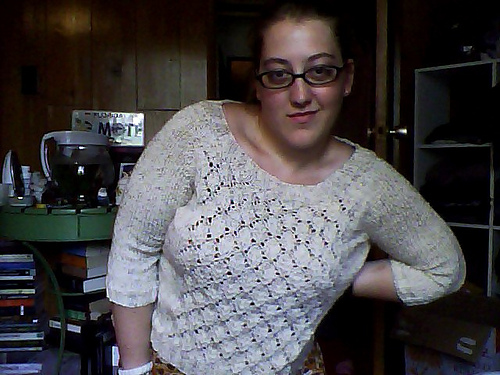