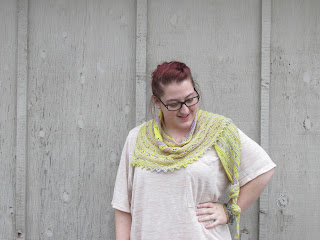 Well, we're supposed to get close to 10 inches of snow here over the next couple of days, so how about a fake summery photoshoot? This is probably the last time I'll ever get to photograph something in a t-shirt for the next five months, so I might as well take advantage of it and show off this beautiful light shawl.

I hadn't really gotten much of a chance to work on my Lupine since I last showed it to you all in September, but a couple of weeks ago I pulled it out of the WIP basket as a palate cleanser between some other big stuff, and I ended up not being able to put it down until it was done. I love the colors so much-it's so light and springy! 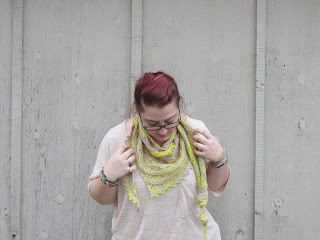 I know I go on and on about how enjoyable Cory's patterns are to knit, but this one was just so enjoyable. I had the pattern memorized really early on, and even though I didn't touch it for a month and a half, it was still familiar when I picked it up again. It totally zoomed along, and I'm already planning some different outfits to wear it with, so overall it's an A+ project. 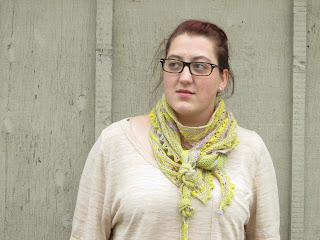