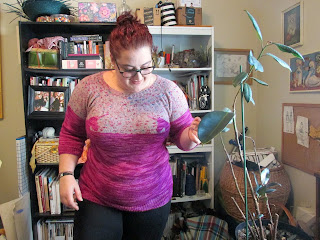 This is easily one of my favorite things I've ever made. I love it. It came out exactly how I hoped it would, the colors are perfect, I can't get over it. I love it.

I started knitting this in October 2018, but I first had the idea some time before that. I was a supporter of the Great Northern Kickstarter, and when the Lonely Souls pattern was released I soon realized that it had a lot of potential. The pattern is great as written, but for my own tastes I decided to change all the moss stitch to 1x1 ribbing, and I eliminated the clever little overlaps at the hem and sleeve cuffs. 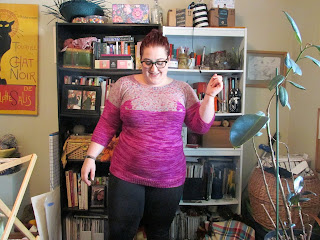 I added a bit of length to the body (I'm not sure how much, I kind of just eyeballed it) and I added two inches to the sleeves. I love shortened sleeves, but I prefer them to hit below my elbow. I also knew I wanted to eliminate the keyhole back—it's super cute, and I love the way Teresa designed it, but having just a small spot on my back where I can feel the breeze drives me crazy. I waffled a bit on how I wanted to do the yoke—I initially thought of knitting the yoke in the round and doing the unicorns in duplicate stitch afterwards, but at the last minute I decided to knit the yoke flat as written and use intarsia. I decided that duplicate stitch would feel too thick in those spots, and I was worried at this gauge (it's not super loose, but it's definitely not dense) that the speckled yoke might show through the duplicate stitch. 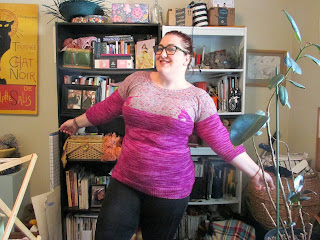 Obviously, I changed the horse chart from the pattern to a unicorn. That was pretty easy, and I typed up my new chart in excel and printed it out alongside the pattern instructions. I mirrored the instructions for the second unicorn, and I also changed the placement, moving each chart ten stitches towards the center, so the unicorns would be more on my chest than hiding in my armpit. I don't think I would have changed their placement if my bust was significantly smaller, but knowing how far out my bosom protrudes, there was a real chance that you'd only be able to see the unicorns from the side if I'd left it as written! 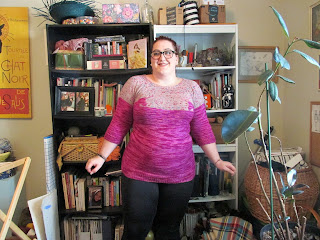 I closed up the back of the yoke with mattress stitch before knitting the neckline ribbing. I did shorten the yoke a bit—as written, there should have been another inch or two and a fourth row of decreases, but at some point my stitch count became very off (????), and I was running out of the speckled yarn, so I tried on the sweater, decided exactly how many decreases I wanted before the neckline (not as many as written, because of the stitch count problem), and did the ribbing. I certainly wouldn't be opposed to a deeper yoke (I love a deep, roomy yoke!), but I'm really happy with how the yoke came out. It fits well, and the silhouette works perfectly with my plan for the sweater. 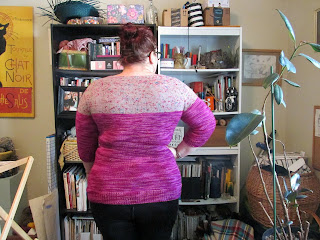 As far as my name for the project on Ravelry, well, the sweater has unicorns, and they're not lonely souls, because they're right there with their friend. I know, I'm adorable.