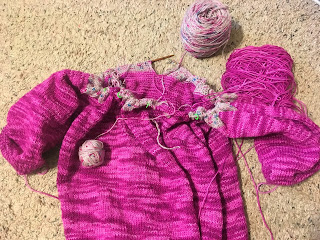 I can't believe it's been ten weeks! The pandemic has really changed a lot very quickly, and it's hard to comprehend that I've been isolating in my apartment for so long.

Anyway. Let's talk knitting! I finished the sleeves for my unicorn sweater and got them attached to the body, and I'm currently ten rows into the 26-row intarsia chart. I very rarely knit yoke sweaters from the bottom-up, and that first inch after attaching the sleeves is so hard! I'd love to get the intarsia finished this weekend so I can zip through the yoke decreases and get started on finishing, but it took over five hours to knit the first twelve rounds of the yoke (two rounds in the MC followed by ten rows of intarsia), so we'll see how I do.

I went back and forth up until about three minutes before I started the yoke about whether I wanted to knit the yoke flat and do the colorwork in intarsia, as written, or if I wanted to knit it in the round and duplicate stitch my unicorns on later. Obviously, I decided to go with intarsia, and now I have a confusing, tangled mess to deal with. It'll all be worth it, though.

I'll go more into details about mods when the sweater is finished, but it's pretty heavily modified, just for my own preferences. It's made following some parts of the pattern challenging, as I have to remember what I've changed and how it affects the instructions, but that's all my own fault for making half-assed notes on the pattern (and using water-soluble ink and then spilling beverages on it, so quite a few of my notes are now just a blob...).

As always, I love you. You are each very special to me, and the world is better for you being in it.
Posted by Kat Riddell at 10:46 AM