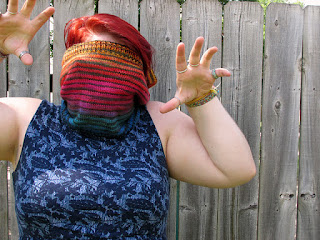 Community theater is done for the summer, but it always holds a special place in my knitting life. Knitting during play rehearsals can be tricky - it needs to be something that won't get finished too quickly, but I also need to be able to put it down in the middle of a row if I need to.

Recently my good friend Annika released Olympic Boulevard, and I immediately wanted to cast on. So I downloaded the pattern to my phone, grabbed a skein of yarn from my stash, and headed over to play rehearsal. But as I sat winding the yarn into a ball, I realized that what I thought was a variegated skein was actually a self-striping gradient! I love a gradient, but I hate letting any of the color progression go to waste, so I knew a hat wasn't going to work. HOWEVER, if I knit a cowl, I could keep going until all the gradient had been knit up! So that's what I did. 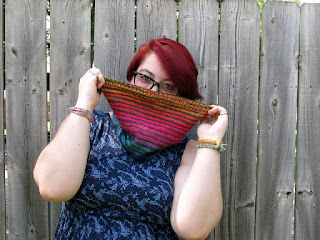 This is just a stockinette tube with eight rounds of k1p1 ribbing at the bottom and the top. I'm really pleased with how it came out, and I absolutely love the gradient with the darker stripes in it. I still need to dig around in my stash for a better yarn for Olympic Boulevard, but, knowing my stash, I'm sure I'll find something. 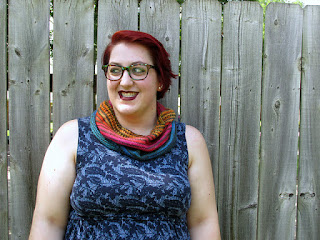 Linking up with Yarn Along
Posted by Kat Riddell at 9:00 AM