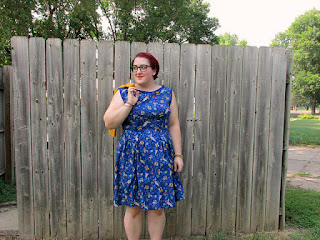 The OAL has been over for almost two weeks, and I only JUST got FO pics! I had such a blast this year, and I'm beyond thrilled to have finally finished both projects within the time frame. I love my sweater and my dress, and I'm definitely going to be wearing them both a lot. 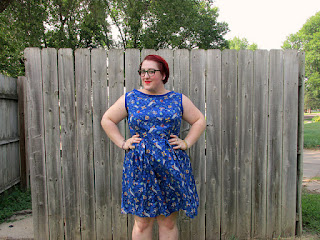 Up first, the dress. This is New Look 6392, view A, in an astronaut-print quilting cotton I found at the thrift store this spring. I used bias tape instead of the neck and armhole binding in the pattern because after trying out the written binding on the neckline I didn't love it. 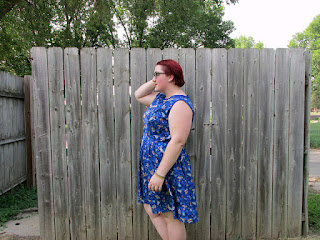 Part of that might be due to the fact that the neckline is too wide on me- the upper chest and upper back are a smidge too big, and I didn't fix it before hand. I have an idea to try out some pleats along the neckline  to bring it in some so it fits a little better, but it's really only noticeable to me and my sewist friends. 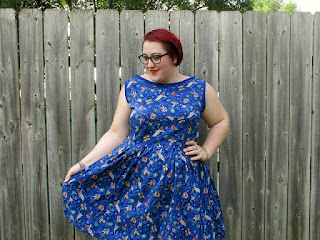 I also modified the dress to have a side zip. The pattern calls for a back zip, but I am single and not flexible enough to do a back zip on my own, so, it had to move. I'm pleased with how the zipper looks, given that I had no clue what I was doing and I pretty much just made it up as I go along (am I supposed to use a special foot for a zipper? I feel like I probably am.). 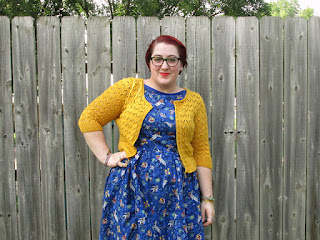 My sweater is Hetty, which was my sweater for last year's OAL as well, but this year I kept the length as written. After finishing my hip-length Hetty last year, I knew right away that this pattern was a winner for me and that I needed a cropped version too. 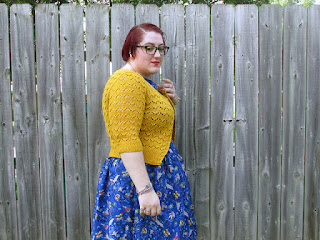 I also did some fooling around with gauge to knit this out of a lighter weight yarn than the pattern called for, and I'm really pleased with how the finished cardigan came out. It still doesn't have buttons, but that's not keeping me from wearing it. I'll be going through the city next month on my way to NCFF, and I'm planning on stopping to look for buttons then. 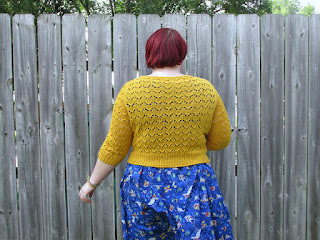