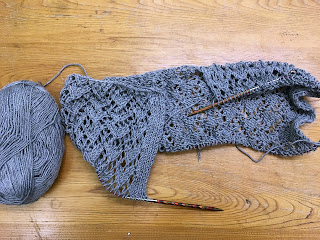 Spring appears to have truly come to the plains, so I spent the weekend getting my rose bushes ready for the warmer weather. I was pretty worried about them- when the frosts and snow came at the start of winter, they all still had green leaves on them, so I wasn't sure how well they were going to hibernate. Fortunately, they've all survived. The two yellow bushes did the best, and after some heavy pruning they're all green branches and new leaves. My one red bush, however, almost didn't make it at all. After I got in there with the pruning shears, I managed to find some green way down at the base, and I ended up having to cut the entire bush back to about 4 inches. What's left now is good growth though, and hopefully it'll grow enough over the summer to handle next winter better.

I've also been steady at work on my Zinone I finally came to terms with the fact that I don't have enough of the black yarn for Corrine- I'm more than halfway through the yarn already, and I haven't even reached the halfway point of the front piece. So that's going to get ripped out and I'll just have to wait until I find the right yarn for Corrine. I definitely want to knit up the black yarn this year, though. The current front-runner is Morning Mist, but I'm going to try and finish Zinone before I go crazy casting on anything new.

Linking up with Crafting On
Posted by Kat Riddell at 8:43 AM