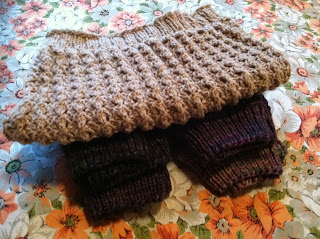 Blocking's gotten a little away from me again, as you can see by the little-ish blocking pile I've got there. I really need to get back in the habit of blocking things as soon as they come off the needles. We had a nice slow weekend here-reading and knitting on Saturday, a board game brunch after sleeping in on Sunday (we played Betrayal at House on the Hill, and I ended up being the traitor, and it was a lot of fun), and the whole afternoon whiled away watching old episodes of Rosemary & Thyme.

I also got a new computer this weekend! I know I mentioned getting one a while ago, but I didn't love it, and I didn't want to force myself to get used to things that weren't working for me, so I returned it. I ended up custom ordering one from HP, and I'm so glad I did-it's just what I want, and it works great so far (and it's red!). I already have all my software and preferences set up, and so now begins the long slog of transferring all my data. I worked on cleaning my Music folder yesterday, and wow, was it a mess! I know I have a lot of music, but I had empty folders in there, files without names, folders that were horrendously mislabeled (for some reason, I had "Fiddler on the Roof" labeled as "Ambient Dream Pop??"). I'm also finally getting rid of stuff that I don't like anymore/never should have gotten in the first place (I'm pretty sure I never even pretended to like Big & Rich). I'm probably a little more than halfway done with that, and then it's on to the Pictures folder, which is probably almost as bad.

We also went to Ant-Man on Saturday night, and it was so much fun! Definitely not what I was expecting at all-I wasn't really looking forward to this one, but then I heard several good reviews after the premiere, so I packed up my sock and tagged along with Anemone to see it here in town. But it was a better movie than I expected, with some really great moments, and I'm definitely glad I saw it on the big screen.
Posted by Kat Riddell at 7:46 AM