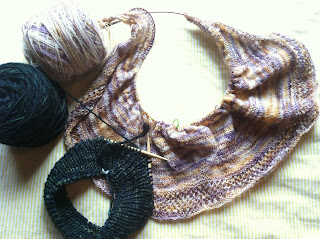 Community theater rehearsals officially start on Sunday, but we had a couple of quick dance lessons already this week. We're doing Mary Poppins, and I'm super excited to be a part of this show, and hopefully I'll be dancing my little feet off most of the time. But I know from experience that there's plenty of down time, too, so I need to identify some rehearsal knitting for this summer.

So far this week, I've worked on a couple of hats as well as Mottled Daydream. I'm loving Mottled Daydream, and it's a pretty serious contender for being my dedicated rehearsal project-simple, can be put down in the middle of the row, no charts. The only catch is that I'm really enjoying taking my time with it-it's getting knit up a couple of rows at a time, and that's a nice change from my usual pace. There's also a big part of me wants my mum's Rocky Coast to get this priority, but the high school is under renovation right now, which means our main rehearsal space is without air conditioning-not the best environment to be working on a wool sweater.

So for right now it's looking like Mottled Daydream will end up in my rehearsal bag most of the time, and hopefully I can truck Rocky Coast around when we're in cooler rehearsal spaces. Or, knowing me, I'll start something completely different and bring it to rehearsal.

The possibilities are almost endless. 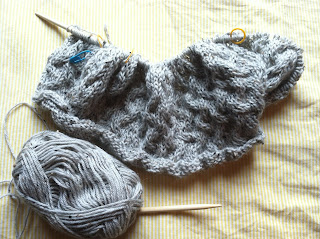