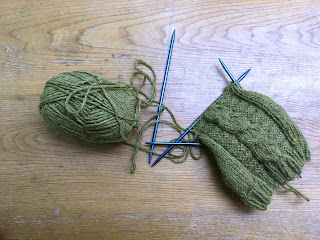 I carried over plenty of projects from 2017 (and 2016, and 2015, and...let's not think about it), but I've already gone and cast on my first  two of 2018. The first is my new Easy A for the Easy A-long (today is the last day to save 20% on the pattern with code EASYALONG and there's still plenty of time to jump in and join us!) and the second is a pair of legwarmers.

I wear a lot of skirts and dresses, but for some reason I haven't owned a pair of legwarmers in years. The past couple of winters have been on the mild side, so I haven't really had a problem walking around in tights, but last week we were hovering in the -30s Fahrenheit, which is just too cold to not have pants or legwarmers on.

The first one is going pretty smoothly so far, and I'm planning on mirroring the cable on the second one to help with second-legwarmer-syndrome. I'm really enjoying knitting it so far, but I definitely want to get these churned out before it gets super cold again.

Linking up with Yarn Along
Posted by Kat Riddell at 8:23 AM