Is it Really Only Wednesday? 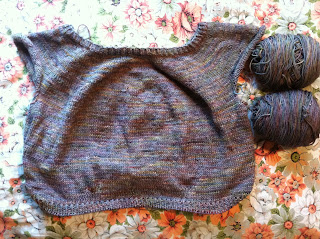 The late rehearsals are taking their toll on me-so far every day this week has felt like it should be Friday. I've been trying to counter the fatigue with cute outfits, and that helps, but I'm still just plain tired. I'm loving the rehearsals, and I'm grateful for the extra rehearsal time, and I really think the show's coming together well, but I do really wish that I could squeeze in another hour or two of sleep.

There's just three weeks left until we're done-two more weeks of rehearsal, then production week, and then set breakdown, so I'm reminding myself to enjoy this stage of the process, because here's when it all starts to get really intense and overwhelming. It's also the point where everything goes so quickly, and I'm really having fun with this show and don't want it to be over in three weeks.

Knitting continues to go as predicted-as you can see, I'm now several rounds into the bottom ribbing of my TPCT, and most of that has been done in five-minute bursts during water breaks, so I'm very pleased. As planned, I did bring Finn to the run through last night, although I don't have a photo because I didn't get home until after 10pm, and I made swell progress on that first sleeve. I'm still hoping to be able to get the pattern done this weekend, but I'm definitely putting catching up on sleep ahead of pattern writing.

Linking up with Yarn Along
Posted by Kat Riddell at 7:36 AM