This week is going so fast, I feel like I barely have time to tell you all about anything before it's all done. For example, I planned to show you a lot more of this before it was already more than half done: 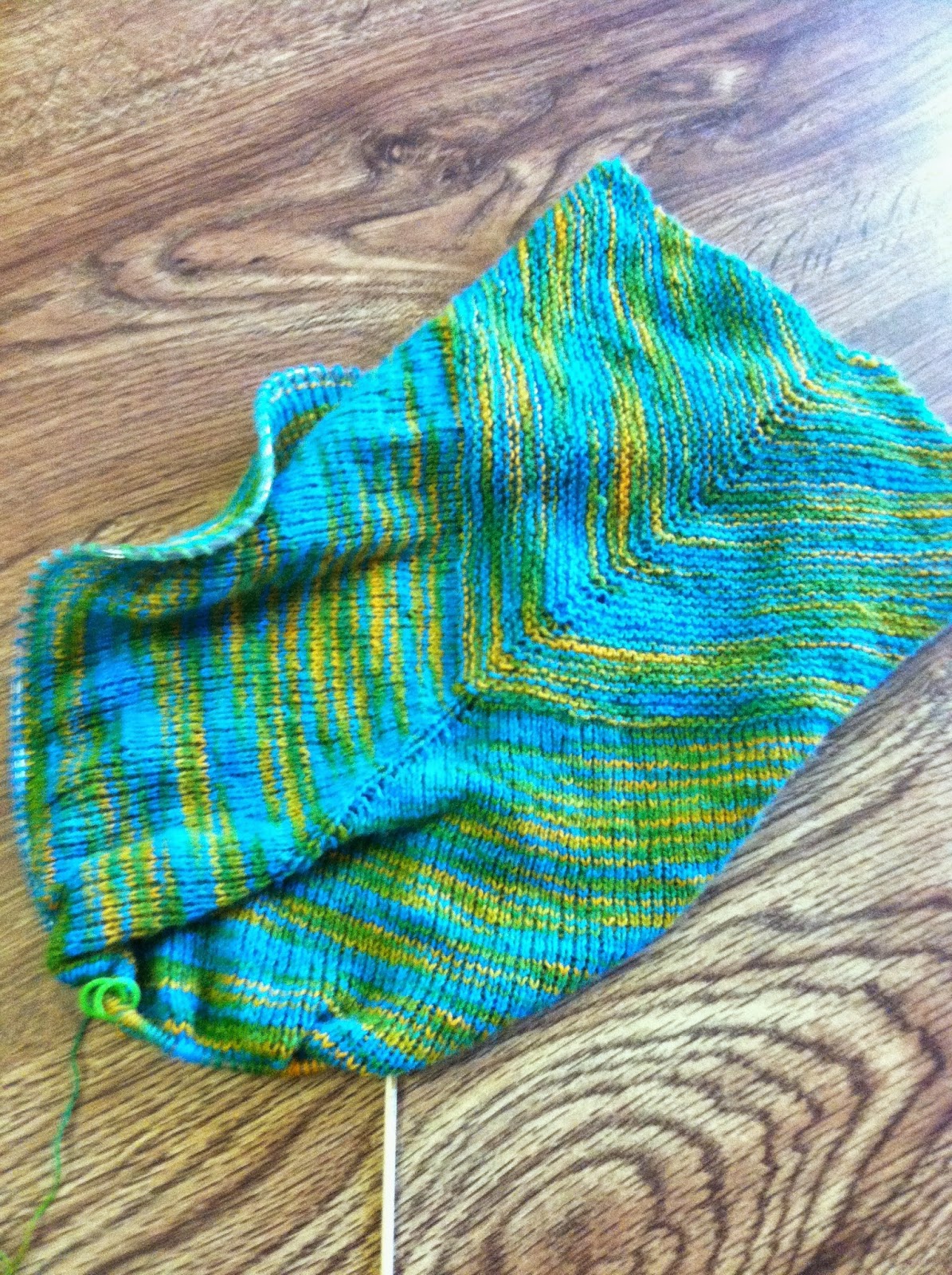 Tubularity, by Martina Behm. I absolutely adore this. It's so easy I barely have to pay any attention to it, but the shaping to keep it asymmetrical is just interesting enough to know I'm making progress. And this yarn works so well for this pattern-even better than I expected. I love it when a pattern and a yarn come together so well, like they're meant for each other. I've had a bit of a rough go with this yarn, but I'm so glad to have finally found its destiny. I can't even feel bad for frogging the Mottled Daydream because the yarn looks so much better this way.

I also (finally) finished A Storm of Swords

, which I've been working through since May (I can't believe it's been that long), and I've decided to take a break from the series. I love them, I really do. I adore the characters, I adore Westeros, and I love George R. R. Martin's writing, but I got to a point where I was reading these out of duty, and they were feeling more like a chore. I really don't want reading to feel like that, and I needed to fall back in love with reading, stat. I tried telling myself once I got all caught up in the series I could read whatever I wanted, but that wasn't doing anything for me. Entire weeks were going by without me reading anything because I let myself get so bogged down by the book. 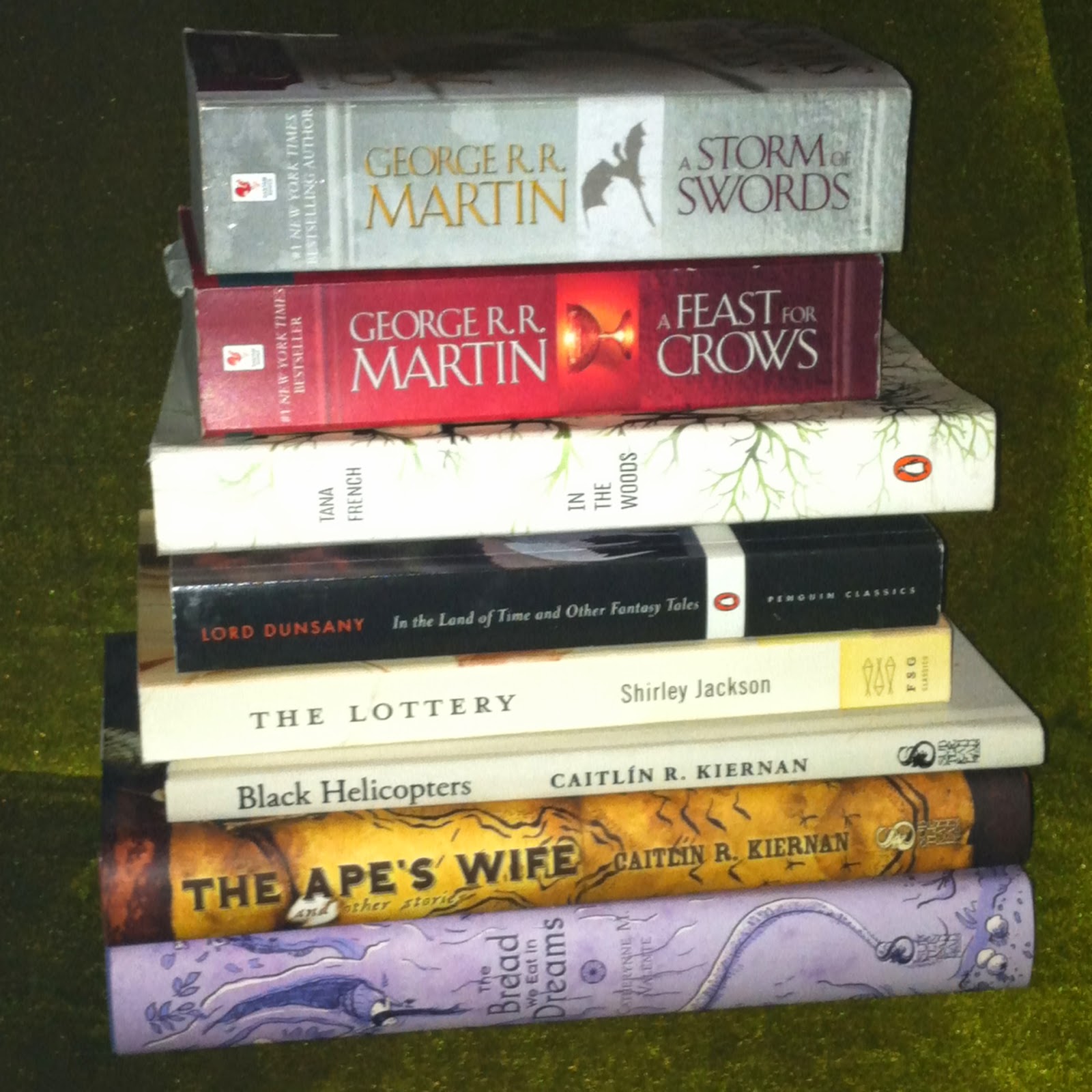 So I decided that once I finished A Storm of Swords (I was only 150 pages from the end), I was going to take a break. I finished it after binge reading it on Saturday morning, and I was all ready to start A Feast for Crows

, but I stopped myself. The point of taking a break, I reminded myself, was so that I wouldn't get bogged down by it again. So I branched out. I have a collection of Lord Dunsany

that I've been meaning to get started on. I have Black Helicopters, that I got as a bonus chapbook with The Ape's Wife and Other Stories

in December of 2013, both of which I hadn't started yet. The same goes for The Bread We Eat in Dreams

. Then Saturday afternoon at the thrift store I picked up The Lottery and Other Stories

, which I finished by Monday evening, and In the Woods

, which I've been eying for ages but haven't picked up because of the ASOIAF Books

Like I said, I love ASOIAF. I really do. But at the point when reading starts feeling like a chore, I knew I needed a break. And given that I finished The Lottery in just two days tells me I was right to take one. I'm not going to guess how long of a break it's going to be-probably at least until after Xmas, but who knows how I'll be feeling in a couple of weeks. But as you can tell from my current reading list, I have a thing for short fiction, and those books are anything but. So no wonder I needed a bit of a break, I've been trying to run back to back to back literary marathons for the past year and a half. According to my Goodreads account, I've been sneaking in other books while reading ASOIF already, so I might as well take the hint and make it official.
Posted by Kat Riddell at 9:08 AM