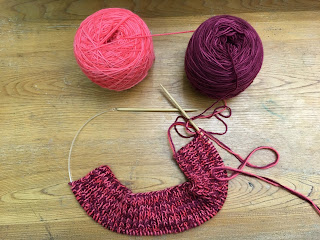 I am so ready for the weekend. Because of New Year's, I only had a three-day week in the library, but after taking eleven days off at the end of December, I definitely needed the short week to ease back into things. This weekend my plans are to work on a sweater sample, read one of my library books, and work on my current jigsaw puzzle—The easiest parts are done now, which means a slow slog while I figure out how acres of tan and white fit together.

This is the fourth day of the Wayward KAL, and I'm really enjoying working on my marled Old Harry. This photo is from the other day—I'm actually almost finished with the upper back now. The KAL thread on Ravelry is pretty quiet, but I'm hoping some more of you decide to come on over.

Today is also my diabetes anniversary! It's been ten years since I was diagnosed, and I can't believe I've spent more than a third of my life on insulin. Diabetes is frustrating and expensive, but I'm so lucky to be as healthy as I am. As is my tradition, I'll have cake tonight to mark the anniversary of my diagnosis. The plan was to make a Victoria Sandwich (yes, I rewatched all of GBBO last month), but when I made the sponges last night they...didn't turn out quite like Mary Berry's. I don't think I've ever fucked up a bake quite this badly, and these cakes are the funniest things I've ever seen. I was laughing so hard I could barely breathe! 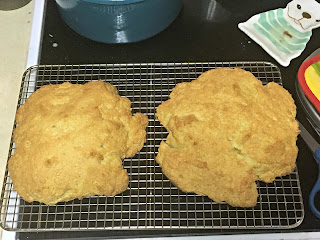 Fortunately, they're still edible, and not entirely unlike a shortcake or a slightly less-dry shortbread. So instead of Victoria Sandwich, I'll swing by the store after work for strawberries and whipped cream. I'm sure there's some kind of allegory here for diabetes, and how things don't work out as planned, but I'm mostly happy for ten years of cake. Here's to many, many more anniversary cakes in my future.