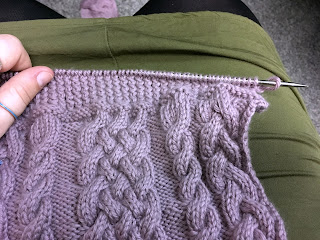 It's looking like I'll either just make my goal of getting the front of my Henri finished by the end of the BK Hipster KAL, or I'll fall short. Either way, I've really had a blast with this KAL, and I have almost half a sweater now! I had been planning on powering through and getting this finished, but I've decided to jump in and do NaKniSweMo instead (more on that later). I'll certainly keep working at this, and I want to get it done by the end of the year, but most of my attention is going to be on my NaKniSweMo sweater. (I'm also going to be doing NaNoWriMo again, because I am a reasonable, well-adjusted person.)

This weekend is going to be pretty busy for me. Tomorrow night is the All-State Concert, which my brother is in, so I'll be going to that, and then the HS theater club haunted house is Sunday and Monday, and it sounds like I'll be helping out with that again. Anemone will also be coming down to visit, watch Halloween movies, and come to the haunted house, so overall it's going to be a pretty good weekend.
Posted by Kat Riddell at 8:52 AM