Well, I finally have pictures of my finished Hetty! I knit this sweater in three weeks during the OAL, and then I spent two and a half months putting the wrong buttons on, finding better buttons, replacing the buttons, and not taking photos of the dang thing. But all that is behind us now, because Hetty is here and done and marvelous!

I did not end up finishing the dress that I was making for the KAL. It is hanging in my closet, unfinished, and I don't know if it's worth trying to finish. There are some pretty significant issues with it, and I'm leaning toward calling it a learning experience and getting rid of it. BUT the sweater is amazing. I generally don't wear things until I've photographed them, but I've worn this at least four times already. It's by far my new favorite cardigan. 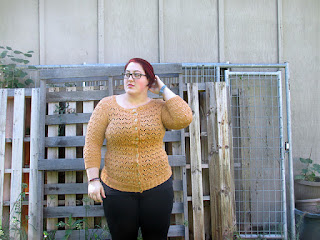 Clearly, I modified it. I added a significant bit of length, so I had to add in some hip increases. Otherwise, I knit it as written. I love the sleeves at their original length (even when I bother knitting full sleeves, I end up pushing them up anyway). I did have a bit of a stumbling block with the bottom ribbing- I misread the pattern and only knit 2/3ds of the ribbing called for. I debated leaving it, but it definitely looked wrong, so after finishing the sleeves I unpicked the bindoff and added rows.

Like I said, this cardigan is pretty much perfect. I absolutely love wearing it, and so far it's worked equally well over dresses and with jeans, which is really all I can ever ask for in a cardigan. 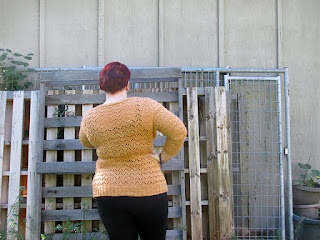