Half a Scarf, and Some Other Things 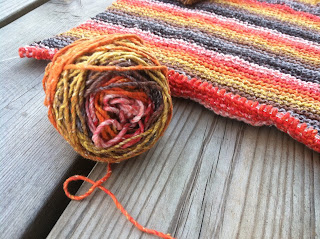 Gosh, are we really halfway through October already? My Halloween scarf is progressing nicely, and it's coming along just as I hoped it would. I'll admit-I was a bit nervous at first that the colors wouldn't look quite-so-Halloweeny once knit up, but I'm happy to be proven wrong. This has really been a delightful knit so far, and I'm very excited that after some weighing and some quick and dirty math, I have enough yarn to knit the pattern as written, just at a larger gauge. For a while I was afraid I'd need to cut out a repeat on each side, and I really wanted a nice long scarf, so I'm super excited about that. 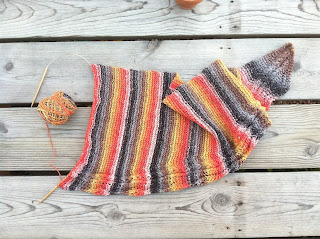 This is just past the halfway point now, but I'm going to have to put it away for a few days to get some other things knit. A friend of mine from college asked for a bulky hat and some fingerless gloves, and the yarn for those just arrived, and the needle for my mum's sweater sleeves just arrived in the mail as well. Hopefully though, these projects won't take too long and I can still get everything done in the next couple of weeks. The hat should be the work of a lazy Saturday, the gloves can hang out in my purse, and...mum's sweater is at that unfortunate point where I have the smallest pieces to knit, but the largest amount of sweater to carry around. So I'll have to come up with something creative for that.
Posted by Kat Riddell at 8:49 AM