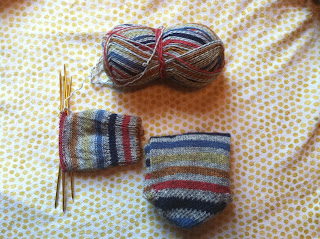 Oh man, I thought I'd never get the first sock of these done! I haven't really been going to a whole lot of movies this year, and while I took the sock with me to Minnesota back in March, I hadn't really gotten much more work done on it. Last weekend my brother and I went to Jurassic World, though, and the end of the first sock just flew off the needles.

Then on Wednesday night, my mum and I went to see Spy, and I got half the leg of the second sock done! See, when I actually go to the cinema, I make progress on the Cinema Socks. I don't mind having these drag on in the background, though. If I don't have a good cinema project already started before I go to a movie, I'm rushing trying to get a couple of rounds done before the lights go out so I can just cruise along in the dark. And while sometimes I lose interest on projects that I haven't worked on in weeks, I know that these are just for working on at the movies, so there's no pressure to work on them any other time.

I'm still in love with this yarn-I love how Patons Kroy works up in my favorite needles, and I absolutely love the stripes in this colorway. Since I started the first sock right after last Xmas, I should be pretty set to have the pair finished sometime in the next six months :)
Posted by Kat Riddell at 7:55 AM