A Lot of Laundry, Plus Some New Books 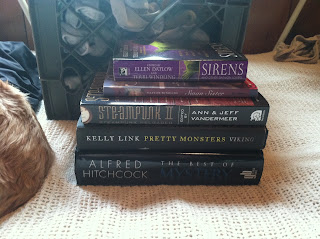 Happy Monday and Happy June! I hope you all had good weekend and are ready for summer, because apparently it's here to stay. I have identified several cool spaces that I can retreat to, and I've cut off three old pairs of pants into shorts, so hopefully I'll survive the next few months.

I've been fighting some weird hive-like rash the past couple of months, and after several weeks of tracking it and a little bit of research, I'm hoping it's a reaction to my laundry detergent. So I mixed up some homemade laundry detergent on Saturday, and spent most of yesterday laundering pretty much everything I own. I got through about half of the clothes, and most of the bedding, and hopefully my skin will start clearing up this week. For the curious, here's the link to the recipe I used-we've used it before with great success, and then fell off the wagon mixing up more (no excuses, really-the hardest part is grating the soap). But I have no complaints about its performance, and it doesn't leave a scent (at best, it smells vaguely like soap, and it all rinses out).

We also went on an epic thrifting adventure Saturday afternoon! I got a couple of skirts, a hilariously dated orange flower wall hanging, and some books-especially short story collections (pardon my dog's butt in the picture up there, he was napping and I didn't want to disturb him). I got really into short stories in high school, when my English teacher turned me on to Neil Gaiman, and half of his books that the library had were short story collections. Since then I've branched out to find a bunch of authors and editors I love, and I especially love them for reading before bed, so I won't be tempted to stay up late after a cliff hanger. I haven't been reading too much lately, but hopefully work should slow down some the next couple of weeks and I'll feel more like reading then.
Posted by Kat Riddell at 7:56 AM

Email ThisBlogThis!Share to TwitterShare to FacebookShare to Pinterest
Labels: books