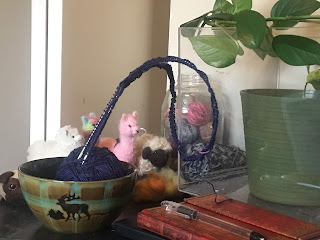 I think I'm going to scale back to blogging twice a week, probably on Mondays and Fridays. This is something I've been thinking about since last summer, and there's enough going on in my life even without all this Covid nonsense that I think twice a week is a good move.

Anyway, updates: the new sweater I mentioned last week and STILL HAVEN'T SHOWN YOU is doing good. I think I'm about halfway through the sleeves? This sweater is knit flat and seamed and starts with the sleeves (no sleeve island later!), so I'm doing them two at a time because wow, I hate being stuck on sleeve island.

I spent several days this week working on my vest sample before realizing last night that it is absolutely not working as I'd hoped and needs to be ripped back to before the underarms. I also realized that it's going to need four skeins instead of three, so that's a problem. I reached out to the one person on Ravelry who has a skein in this colorway in their stash, and if I hear back, great. If not, I have another idea I could use this yarn for, and this vest will just get shuffled off to next summer's list. I'll survive.

After all the wailing and gnashing of teeth over the vest, I cast on what was supposed to be my second summer pattern, a tank with some lace around the bottom. It has only half of a round so far, as I cast it on at eleven last night, but I'm hopeful that I can catch up on my Netflix queue and start banging it out.

I didn't do too much baking last week, other than a coffee cake on Saturday. I'm hoping to do bagels this week—I've never done bagels before, but I've also only had one really, really good bagel since being diagnosed with celiac disease, so they've been high on my baking list for a while. I've also been craving Eggs Benedict like crazy, so once I get a batch of bagels done, I can make that as well!

I love you all. Your skin's looking great, and whatever you've been doing to your hair is really working for you. You are a beacon of loveliness in a world of uncertainty. Your houseplants are thriving. Your pets are so glad you're home. Remember that I cherish each one of you individually.