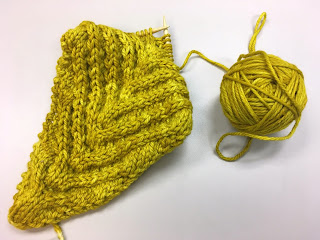 Happy Monday, kittens! I hope you all had a refreshing weekend! I spent Friday evening clearing out my storage closet and I threw away SO MUCH STUFF. It's crazy how much stuff I've been carrying around (and how much stuff my parents have been carrying around for me!). I still need to organize the things I'm keeping, but that space was really weighing on me and it's great to have that done.

I had a lot of swatching to do this weekend, and I managed to get it all done despite distracting myself at every turn with other things. I finished the shawl sample and it's blocking on the futon now, and I started this new cowl sample that I'm already completely charmed by. I initially cast this on as a way to avoid swatching, but I finally forced myself to set it aside just long enough to get the swatches for a couple of summer patterns done.

Linking up with Crafting On
Posted by Kat Riddell at 8:20 AM