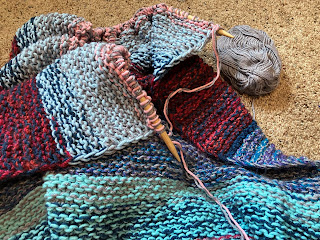 Well, it's been a while! Friday I had the day off, so I slept in and just had a lazy day at home, and Monday I had to brave my way into the city for a doctor's appointment. Not much has happened since I last chatted with you—I've been pretty bored, honestly. Nothing on tv interests me, my books aren't really interesting me, and I haven't even really felt much like knitting. I'm pretty sure it's just a quarantine slump, but man I wish it'd wrap up soon so I stop feeling so bored all the time.

The other day I pulled out my cuddle blanket, which I haven't worked on in ages—probably not since I was still living with my mum. It's been a pretty low-priority project for me, but I want the space that it's taking up in my yarn closet and it'll also count a lot towards my Stash Dash goal. It's a bit unwieldy to work on, as it's so big now, and the needles are much larger than what I usually use, so I can't really work on it for more than 30-60 minutes at a time, but it'll be great to have it finished, especially once summer's over and cuddle weather starts setting in.

I'm not really planning too much for this weekend. I have some admin work to catch up on, but I'm also hoping to take some time to just consciously be lazy in an attempt to kick this boredom streak.
Posted by Kat Riddell at 11:08 AM