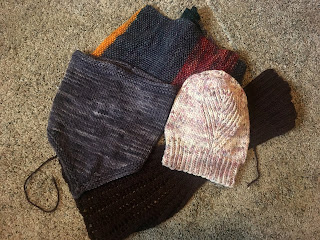 So, clearly I'm still trying to adjust to whatever my new schedule is. It's weird. It's all weird. I love being home, and I love being by myself, and even I'm struggling with this new normal. My heart goes out to everyone who's really missing being around people and being in public places. This sucks, but we're tough.

I've pretty much stopped sample knitting. I don't know if I'm still mad at my vest for having the wrong increases, or if I don't love the concept, or if the weight of *gestures widely* makes the thought of "work knitting" just too much.

I very nearly cast on a laceweight sweater last week, but I reigned myself in and decided instead to focus on some quick projects that have been in my queue for an age and a half. Let me tell you, if you have the stash for some quick projects, they are GREAT right now. In just a day or two, you go from "a skein of yarn" to "new cowl!" or "new hat!" and that feeling is incredible. It's an easy win, and it's a sign of progress in a time when time itself feels meaningless.

So far I've knit a Purl Soho Bandana Cowl, a Breony (which I've been meaning to do since the original sample went to live with Tara YEARS AGO), and most of an Arikaa Cowl (it just needs a seam and fringe). I also finished my Rios Scraps Cowl, which has been on the needles since 2016 and came out EXACTLY how I wanted. I'm also doing Jessie Mae's MKAL, which I'm really loving right now—ribbing in the round forever and ever with medium-weight yarn? That's exactly what the doctor ordered right now.
Posted by Kat Riddell at 10:34 AM