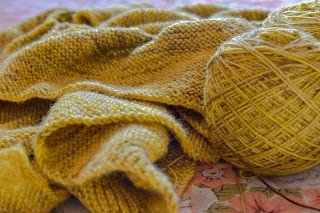 Hiya, kittens! I hope you all had a good weekend. I finished the baby sweater for my cousin's new sprout—all it needs now is a blocking and buttons, and then it'll go right into the mail so it's ready for the little guy when he comes.

I also cranked out a bunch of work on my new sweater sample and made it though a quarter of the body. My mum came over yesterday and took this awesome picture of the sweater in progress, and I'm really hoping to hit the halfway point on the body this week. I don't know how realistic that goal is, though—it turns out fingering-weight sweaters take a while to knit.

On Saturday I tried a new recipe and made chickpea nuggets. They're good, but I don't know how often I'll make them going forward. They were a bit more labor-intensive than I'd like, and they made a bit of a mess. They're also made almost entirely in the food processor, so I can't really make a big batch all at once. It was fun to try something new, though, and I still have some nuggets left for a couple of dinners this week.
Posted by Kat Riddell at 8:41 AM