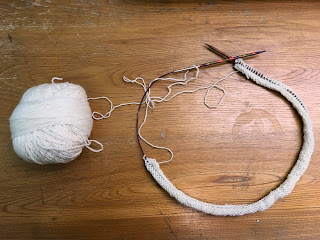 I made some more progress on my new sweater (it's going to be called Chaverim, which is way shorter than "my new sweater," so I'm probably gonna refer to it by it's name from here on out).

"But Kat," I can hear you say, "isn't that much smaller than it was on Monday?"

Yes, friends, it is. I made it through most of the upper back before deciding that I wanted something a little different, and I ripped out and started again. It's a fact of life. I frog so you don't have to.

It's not a big change or anything, but I'm a bit of a perfectionist, and I really wanted this to feel like it did in my head, and that meant ripping out and starting over. I'm much happier with my new plan, and I'm looking forward to working on this throughout show choir season.

Otherwise there's not too much going on here. Yesterday morning I was home with some blood sugar issues, so I got to spend half of my Valentine's Day cuddled with the dogs, which is probably the best possible way to spend Valentine's Day. (Seriously though, dogs are the best valentines. They love cuddling and you don't have to share your chocolate with them.)

Linking up with KCCO and Yarn Along
Posted by Kat Riddell at 8:52 AM