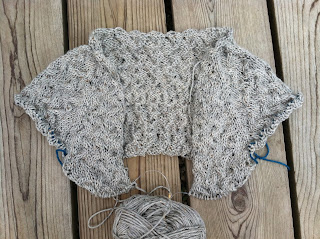 Right now most of my knitting is in the stage of "I promise it's getting bigger, even though it looks exactly the same." Which is tough for this blogger, because I don't really want to give you identical photos every day. Or a series of posts that all consist of "I've knit seven rounds on this cowl. Yes, it's still the same size," or, "The rows on this shawl are twice as long as they were a couple weeks ago, even though there's less than an inch of visible progress."

So I'm really glad to have some actual, tangible progress for you today: I finally divided the sleeves for Mum's Rocky Coast! Not only is it finally starting to look like a sweater, but the body knitting is really coasting along now (see what I did there? I kill myself). Not surprising, given that there are 100 sleeve stitches total, and now I don't have to knit them anymore. Plus, I don't have to keep track of things like raglan increases or integrating new stitches into cable repeats. It's just smooth sailing.

Now, of course, comes the problem of it's going to get rather large rather quickly, and it's still hot enough that I don't feel like dragging a giant pile of wool around with me. But that's a problem for Future Kat.
Posted by Kat Riddell at 7:58 AM